Several months ago I was seated in a cafe-bar in the town square enjoying a drink and wearing this t-shirt (or something very similar): 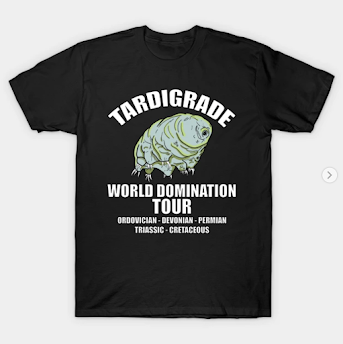 I was approached by a young man who wanted to talk to me. Normally this would be a terrifying prospect, but this person wanted to talk tardigrades. It turned out that he was also autistic! We have since stayed in touch and are working together as part of an autistic adults group.
It was no surprise to me that another autistic person likes tardigrades. In fact there are many of us who are fans of the so-called water bears. But why?
Tardigrades are extremophiles, that is to say: a creature that can live, or even thrive, in an extreme environment. You can expose them extreme temperatures (e.g. they live for 30 years at -30 degrees), expose them to lethal levels of radiation, crash into them at high impact, and subject them to ridiculously high (or low) pressure: it matters not to the tardigrades. They can survive anywhere, from frozen mountain-tops to ocean depths. You can starve them, dehydrate them and even send them into outer space, they will still survive. In September 2007, a collection of dehydrated tardigrades were taken into low Earth orbit on the FOTON-M3 mission. For 10 days, they were exposed to the hard vacuum of outer space. Back on Earth, more than 68% of the tardigrades were reanimated within 30 minutes following rehydration.
It's not hard to see why autistic people identify with tardigrades. The idea of being forced to survive extreme environmental conditions finds a direct parallel in our lives. More than that, the tardigrades are such an alien life form. Their perception of the world is not at all typical. Their bodies consists of a head, three body segments each with a pair of legs, and a back end with a fourth pair of legs. Their feet have four to eight claws each. They have an unusual and complicated feeding apparatus at the front end, resembling a kind of retractable trumpet. They grow to a maximum length of 1.5 mm (0.059 in) and so may be seen by the naked eye but are generally best viewed under a microscope.
Tardigrades have been around for at least half a billion years, to the best of our knowledge. I believe that, after the coming climate catastrophe, they will outlive Homo sapiens and may well become a dominant species in their own right if the planet does indeed become an extreme environment. Who knows - they may grow and develop as they evolve happily in this different world. All hail the tardigrades!