I have been asked to be an advisor to a new university and college network which is still in formation. The network is called "Equality, Diversity and Inclusion in Music Studies". They want me to consult on neurodivergence and disability, which I am happy to do. We had a preliminary discussion last week. I thought it would be interesting to share the notes I sent them after the discussion...

Neurodiversity acknowledges the range of brain types and functions and is a normal aspect of human variation. Like biodiversity, having a diverse range of neurotypes is seen as a good thing generally. The term neurodiversity was adopted by the autism community in the 1990s as a way of resisting the dominant medicalised view of their condition. By saying that autism is simply an example of neurodiversity, rather than a "disorder" or an "illness", they hope to overturn prejudice and advance a social model of disability.

Autism is real and the differences are profound. Probably the worst thing you can say to an autistic person is "we're all a little bit autistic". This denies their identity and undermines the real differences in neurodivergence. The category of "neurodivergent" also includes other conditions such as ADHD, dyslexia, and so on. 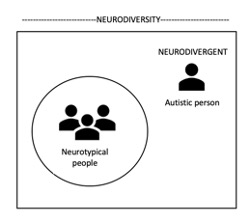 A substantial majority of autistic people prefer identity-first language, i.e. "autistic person" rather than "person with autism". See the survey of over 11,000 autistic people at https://autisticnotweird.com/2018survey/ However, the neurotypical world persists in using "person with autism" (see, for example, the BBC) and worse, correcting autistic people who use IFL. The IFL argument is that autism is a fundamental part of a person's identity from birth and in no way comparable to an illness. As a general rule it is best to ask people which form of address they prefer. When in doubt, use IFL for autistic people.

This is a hot debate in neurodivergent circles. To what extent is autism a disability? There is no doubt that it can be disabling, but the more obviously disabling aspects are usually the result of co-morbidities such as learning difficulties or delayed speech development, that are not common to all autistic people. So, the argument goes that autism itself is not a disability, but rather that society makes it so. In this 'social model' there is a difference between the disability of, for example, a person who uses a wheelchair, and an autistic person. However, not everybody agrees with this distinction and it is true to say that it is contested.

Dr Luke Beardon's formula: AUTISM + ENVIRONMENT = OUTCOME. This should be repeated again and again. Most adjustments that need to be made for autistic people are environmental. In fact, most of them are quite small and simple to achieve. However autistic people are often unable to articulate what the problem might be in a given environment, so this is something that needs to be worked on over time.

First, Dr Jac den Houting of Macquarie University on "why everything you know about autism is wrong". https://www.youtube.com/watch?v=A1AUdaH-EPM&t=3s

Second, the late great Mel Baggs 'In My Language'. https://www.youtube.com/watch?v=JnylM1hI2jc

In some ways the opposite of Jac den Houting. Non-verbal. Amateur. Poorly filmed. And yet, this is one of the most powerful statements about autism I've seen and will be especially interesting to musical people since it treats sound highly artistically.

My career has always involved me in large amounts of social interaction, with colleagues, with students, with the wider public. When I understand the structure of that interaction, what the rules are, then I can generally perform well. Interacting professionally while at work is mostly fine. But it’s a different story when the rules become fuzzy, or non-existent.

But I have been musing recently about in-between situations. By “in-between”, I mean social interactions with professional colleagues outside work or, rarely, with non professionals (e.g. family) in a work setting.

Music is a social activity. To become a Professor of Music requires social interaction, not just in the making of music but also afterwards, generally in the pub. During my years working in music, I could expect to find myself in such situations at least once a week with colleagues, or a mix of colleagues and students.

My special ability as an autistic person is to make connections between ideas or things that other people cannot see. Situations like this, often helped by a little  inhibition-removing alcohol, would liberate my flow of thought in ways which could be transformative for others. I have ample evidence, in the form of correspondence and people’s histories, of the truth of this. I have had an enormous influence on many academic and professional lives. Some of my conversations have led to innovative educational initiatives, large-scale funded research projects, book publications, new artworks, professorial promotions, and even changes in people’s personal lives.

What I would do is to take the interests or expertises of visiting Professors, PhD candidates, undergraduates, academic colleagues, and connect them with other things or people of which they were unaware, or reframe their ideas in ways that had never occurred to them. To do this, I would draw on my vast reservoir of knowledge (some of it very obscure) built up from my autistic interests over the years. Furthermore, I would hyper-focus on all the people I was talking to, making unexpected connections between what I understood of them and their work or interests. It was a bit like the way I would listen to all the instruments in an ensemble and then hear the relationships between them. People who knew me well would recognise the process, to the extent that my name actually became an adjective for that kind of thinking.

But for this to happen, I had to have an entirely willing audience, and this was not always the case. Some people, understandably, did not like how I could dominate the conversation. I think I alienated quite a few that way. If I did not see an opportunity to speak fluently, I would fall completely silent. People would comment “you’re quiet tonight”. If I then tried to speak, things could quickly go wrong. I now understand why that happened, but at the time I really had no idea. In some cases, the mistakes I made were terminal and some people have never spoken to me again, even though we were close at the time.

The deterioration of my hearing in 2009 meant that I moved away from Music into Computing. One result of all that has been a great reduction in my social life and these days I rarely find myself in such situations. I don’t really miss them much. My ideas remain as fluidly transdisciplinary as ever. I find ways to convey them through other means involving much less social pressure. The autism identification has helped me to realise what was actually going on during those conversations, and I think I would be more conscious of that today. This is not a bad thing. It means that I would be more forgiving of, and able to explain, any negative effects, rather than just becoming confused as I did in the past. It also means that I would be able to see the beneficial aspects of neurodivergence and provide reinforcement of that for others who might be in a similar position.